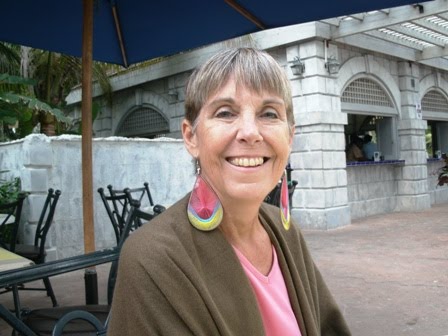 Bobby and I attended the Early Bird Dinner Theatre with another couple.

We had a late-afternoon lunch outside a new Mexican restaurant that is just down the road. We sat just in front of the entrance. The sidewalk is 10 feet wide and overlooks a large parking lot.  The food was good and we greeted people as they came and left.

These were "normal" work days for me. This means I was there from before sunrise to mid-afternoon. Bobby went to downtown Safety Harbor on Monday to stop at the library, to pick up the mail and to eat at a sidewalk table at the Athens Grill.
Tuesday, Bobby didn't leave the house until I picked up the mail and came home.

At 9:30 a.m. we met with her Gyn/Onc. He said that her cancer had spread too far, and there was nothing that additional chemotherapy could do for her. It stage 4, and was in her liver and lungs. He would provide the chemo if we insisted, but he recommended that we contact Hospice for palliative care.
11:00 a.m.  Bobby and I drove to the Dunedin causeway beach and found a park bench that overlooked the Gulf water to talk it over. It was a bright day, and the breeze and shade made it comfortable. It hurt, but we agreed that Hospice was the best choice.
1:00 p.m.  We had lunch at Clear Sky Beachside Cafe, in Clearwater Beach. This has been one of her favorite restaurants since it opened 3 years ago. On the way home we picked up some stronger pain medication, and it was applied using a patch.

She woke up with pain, but after she showered she announced she was ready for a change of scenery.
We drove to downtown Safety Harbor for lunch and found a sidewalk table at the Athens Grill. Bobby ordered a bowl of bean soup, and actually got a couple of bites down! I walked to the end of the block and pick up the mail from our post office, and then returned for a cup of coffee.
Next we drove to Philippe Park and found a picnic table that overlooked the bay. We talked for over an hour.
When we returned home at 1 p.m. she was ready for a nap. She woke up when the first of the Hospice staff came in to complete paperwork. We didn't have everything we needed, so we rescheduled for 4 p.m. on Friday.
Bobby had been told to stay away from alcohol several years ago, so we both stopped drinking. Since we were no longer concerned about hurting her liver I treated her to a very small glass of her favorite wine!

We woke up, and moved to a room that throws a sunbeam on the floor in the morning. We spent about an hour there. Bobby did not have enough strength to walk down the stairs. She got down by sliding on her butt. It was the last time she was upstairs.
I was really concerned about her. She was so weak and so zoned out I was afraid she wouldn't live until the 4 p.m. appointment. I called Hospice and asked if they could move it up. They found a nurse, instead of a clerk, and the nurse was there by noon.
Her brother Chris arrived from Georgia about the same time as the nurse. He remained here until the following Tuesday.
The nurse consulted with the physician, and they decided part of Bobby's condition was caused by the pain medication. They had us remove the patch and go back to the pills she had been taking.

Bobby had slept on the couch downstairs. This was her favorite couch. She sat there when we watched TV, and she spent many hours reading even when I wasn't down there with her.
Her condition was a little better. She wasn't very coherent, but she absolutely refused to lay down. Chris and I sat with her all day.
The Hospice nurse stopped in, and made arrangements for Bobby to receive a different kind of pain medication. She wasn't able to speak much, but later she nodded her head when we asked if it helped.
She finally lay down about 10 p.m. Chris left, and I slept on the other couch. I woke up a couple of times to give her more pain medication.

When Bobby woke up at sunrise she tried to tell me something. I couldn't understand it. It wasn't time for more medication but I was afraid she was in pain. I called Hospice to ask if I could give her more morphine "ahead of time." They said "wait" and they would send another nurse to come by.
By the time the nurse arrived, Bobby was unresponsive. She lay there with labored breathing. The nurse, Michael, took the time to explain to Chris and me what Bobby's body was doing. Michael increased the oxygen flow and arranged for different medications that would help with the fluids.
Bobby's other brother, Scott, arrived from Atlanta. I am glad that both of them were here.
In the morning the only response I could get was when I said "I'm going to kiss you" and she gave a small grin and tried to pucker up. That afternoon she couldn't even do that.
3:45 p.m. The first Hospice nurse arrived to begin round-the-clock care. Kathryn was there for the first shift, 4-12. I cannot say enough good things about her. She certainly comforted Bobby, and us three men in Bobby's life were able to concentrate on Bobby.

A Florida thunderstorm rolled in about 6:45, with lightning and loud thunder.

At 7:15 p.m. the weather quieted and the rain stopped briefly.

And Bobby left us then.

Those were the days my friend....
We thought they'd never end
We'd sing and dance forever and a day
We'd fight and never lose
For we were young and sure to have our way.
(I added the link & lyrics on May 11th.   They just seemed to fit here.   Follow the link and listen for a couple of minutes:  Youtube.com)

I picked up Bobby's ashes this afternoon, and brought her home. These words look macabre as I type, but it wasn't like that at all.
The ashes at the funeral home were held in a plastic bag inside a hard plastic box inside a plain cardboard box. While I was waiting I looked at some of the stereotypical vase-shaped metal urns on the shelves. They seemed so cold.
Bobby had a small wooden box that held special moments of her past such as letters from her parents and grandparents. She kept the box locked, but the key was nearby.
In the funeral home, on the top shelf in the corner was a cherry-wood urn, complete with a lock and key. It was a larger version of her small wooden box, just more polished. Somehow it seemed appropriate for her.  I hadn't selected an urn before because I didn't know what would be required when her ashes got to Virginia. Today was her birthday, and my last chance to pick out something "nice" for her.  So I did. We transferred her to it before I left!

It's been 32 weeks, 7 months, since Bobby's death. Time seems have passed quickly.   I revisited the web page today. This was the first time in 3-4 months. I cried as I read it from top to bottom.
For the past few months I had sensed that the memories were not as sharp as they once were. As I re-read the chronicle there were gaps I could no longer fill. If I hadn't recorded the week when I did, there would be even less of it left.

Perhaps softer edges around memories are a gift of time.

I'm not sure whether the tears were for Bobby, for me, or for "us."

I miss her.
Posted by Rick Jaggers 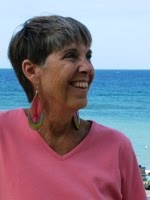 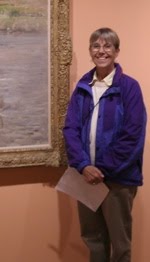 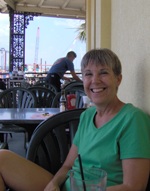 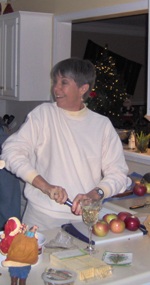 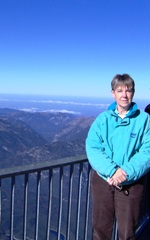